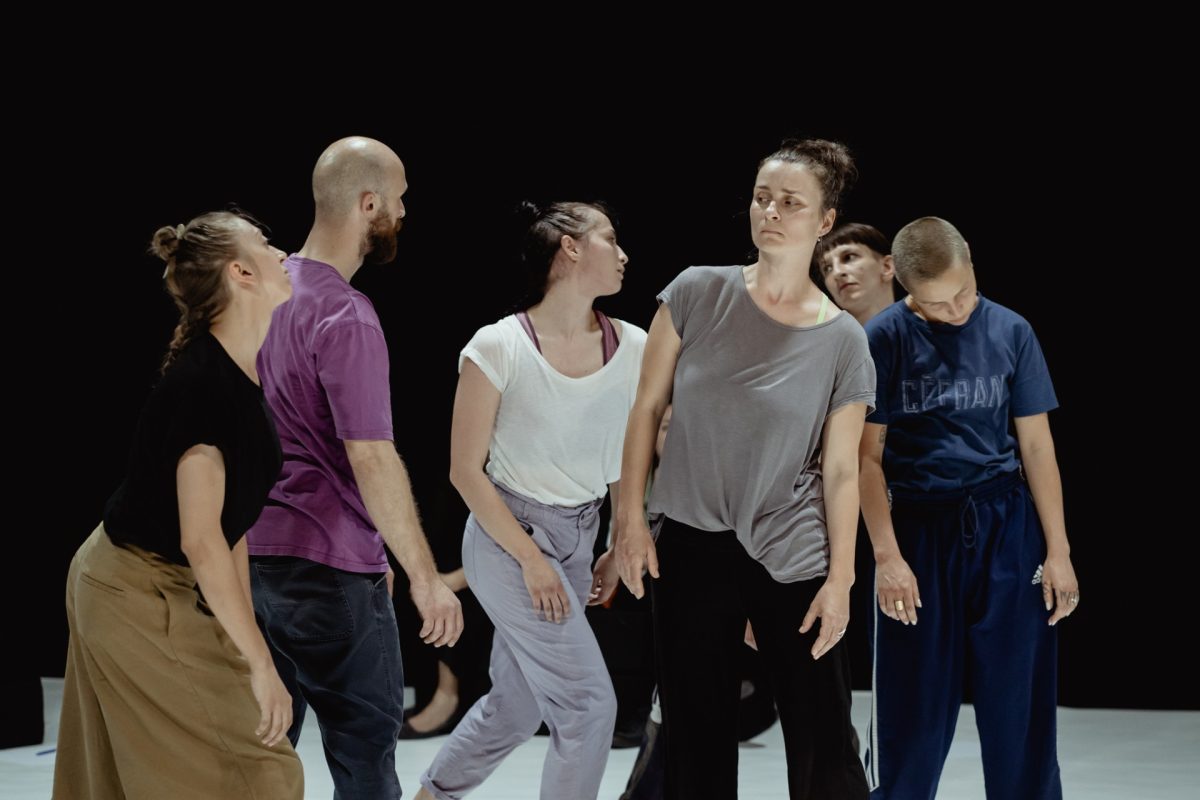 First I learned from M how it all started with the whale’s songs. The ghostly elevator voices, the sound of ice thrown into hot water, breathing that starts in the nose and then goes to the stomach, insects – their unpredictable movements, the noise they make, whistling engines, smooth steps.

R told us after about a slow magnetism between bodies that can create micro sculptures in the unfilled space of the encounter. From air and sound and invisible matter. When a body is calling, you have to answer. When a body is answering, you have to connect to their answer. At the same time the sound tries to penetrate into the somatic. Sound is waiting on hold at the entrance of your system. The whale song is evolving very slowly. Bodies have time to walk and push water backward with the hands in order to step forward. Translating the sound with your eyes, your belly, your spine. Lateral, transversal movements. First you come into space with your ear, and the eye will follow. Find a mate, find two, let the rhythm of the waves move you for a while, reach a climax, then bounce back, refract and fall asleep. Into the sea (you) are returned, to live your loneliness.1

Through absorbing the impulses created by sounds I started to pay more attention. The siren sound, the dot dot dots of text messages, a kid blowing air with a straw into a glass of water, lights buzzing, fridge popping, pouring detergent on a sponge has never been louder, my house is hissing, cracking, humming. My cat did that ekekekkekkek sound to some birds in the morning. I found myself in the middle of the Mărășești Boulevard imitating the sound of whales. BLOoP.

The Whales piece eases you in with a series of patterns that are undoing the way we are used to perceive sound. The sound in a permanent state of becoming and creation of itself. A sound that disappears and reappears. Lighter. Heavier. It’s like a contradiction within your body that can’t anticipate the following movement. And because of that you’re trying to embody the resonance, the remains, the scraps and reject the stability, the togetherness. Patterns and repetition are creating a kind of intimacy over time. It provokes thinking about water, about the feeling of descending into the immensity of it. The ocean filled with sounds and vibrations. Willing to just listen and remain in flux forever. When humpback whales decide to travel, they either do it by themselves or in transient groups of two or three. So the three dancers intertwine and plug to each other, forming a triangle that gets smaller and smaller.

Movements generated by the sound that are generated by the waves that are generated by contradictions, glitches and dysfunctions. And when the performer is not moving, the wave can happen inside, somewhere. The stomach dances the sound. The throat dances a sound. You already dwelt into the water and now all you have to do is to get familiar with every part of your body. To locate the emotional weather and release it physically. In a wave, outside.

We know that the humpback whale population it’s declining, so the process of storing and embodying their sounds seems like a remaking of human condition. This state of imitation and echoing the sound can signify a fossilization of experience2 within body relations. So the Whales it’s not just a performance that results in a significant transformation of the body, but also a mode of evolving-with-the-sound, resembling 4ever the enactment of whales traces of communication.

a disturbance or variation that transfers energy progressively from point to point in a medium and that may take the form of an elastic deformation or of a variation of pressure, electric or magnetic intensity, electric potential, or temperature

a surge of sensation or emotion

something that starts from the belly

something that has the same structure whether it is a gas, liquid or solid

the result of a pulse

What humans share with whales is the capacity to communicate through articulated, structured language. Whales contract their chest and throat, causing air to flow. They do not exhale in order to produce their songs. One song can last up to 30 minutes and be repeated over the course of hours and days. In what other way can we, humans, relate to their voice—but vibrate? By pure thought

their anger from a cry

one that echoes, feels the echo

in the whale song

not only the distance, but also size

shape, texture of the echoing body what humans and whales share

is axial symmetry. We—skulls and spines, nerves cast in bones, are organized as a progression of alternating curves. From the top of our skull, until the inferior extremities. The role of spinal curves is to absorb  sonic vibrations in

the whale structure of our bones

This website uses cookies to improve your experience. We'll assume you're ok with this, but you can opt-out if you wish. Setări de cookieAccept
Politica de confidențialitate