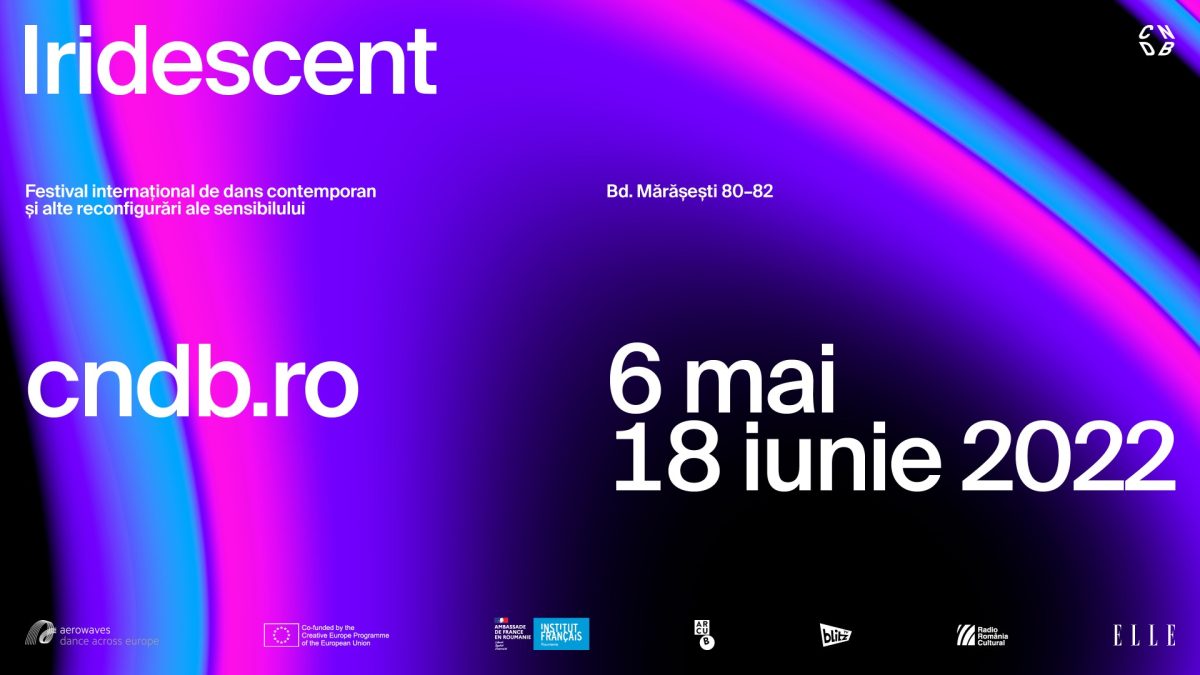 The National Center for Dance Bucharest – CNDB – organizes, between May 6 and June 18, 2022, IRIDESCENT – International festival of contemporary dance and other reconfigurations of the sensible

After a three-year break, CNDB returns with an international festival dedicated to contemporary dance, performing arts and other contents and formats, through which it presents to the public 10 choreographic productions invited from abroad and from Romania, dance workshops for professionals, conferences, group dinners, a listening session and a series of DJ sets, an evening of poetry, a concert and a marathon of ideas, statements and messages for Planet Earth, which create space for emancipatory speeches, and, last but not least, bring the joy of continuing together.

Certain topics and topics always remain urgent and need to be re-addressed, updated and viewed from new perspectives. In the context in which the dominant structures generate and maintain the conditions that brought us in the situation of living simultaneously with the climate crisis, the pandemic and the war, it seems important to reflect upon the power relations in society, on the relationship between man and the environment and to talk about the gap between privileged and defenseless bodies.

Iridescence occurs when a surface changes color, as a reflection of light, in the presence of liquid particles. It is visible in some animals, in certain minerals and in the plant kingdom.

As a way of understanding the world, iridescence becomes a navigational tool that guides and shapes thinking. Thus, the surface is no longer perceived as a simple boundary, but as a brilliant place of convergence of insoluble multiplicity (apud. Tavi Meraud. Iridescence, Intimacies – Journal #61 E-Flux/E-Flux.Com, 2015). Iridescent thinking moves through different sets of possibilities and realities, follows and examines upheavals and connections.

In a complicated, fragile, harsh context in which war is still possible, we believe that dance and art have the power to bring people together and create solidarity.

The IRIDESCENT Festival is a space for exploring relevant concepts/topics, in relation to what affects our societies and communities now. The 2022 edition addresses current issues (climate crisis, biodiversity, feminism, micro-stories), questions anthropocentrism, provokes unfamiliar, critical and perhaps even uncomfortable ways of thinking. Brings people together. Again.

More details about the events and the festival schedule here

CNDB has been an extensive space for intersections between the arts since its establishment, a platform that has presented countless formats, and the Iridescent Festival is a project designed to continue CNDB’s interest in the intersections between arts and to create an interdisciplinary, intersectional, diverse and open framework.

IRIDESCENT – International destival of contemporary dance and other sensible reconfigurations is an event produced by the National Center for Dance Bucharest, with the support of Aerowaves – Dance across Europe, French Institute of Romania, ARCUB-Center for Cultural Projects Bucharest, BlitzTV, Elle Magazine, Radio Romania Cultural.

The shows produced by Collectif La Pieuvre (FR) are presented with the support of the Institut Français Paris through the Relance Export 2022 program.

Thanks Teatrelli & Creart – Center for Art and Traditions of Bucharest for the technical support.