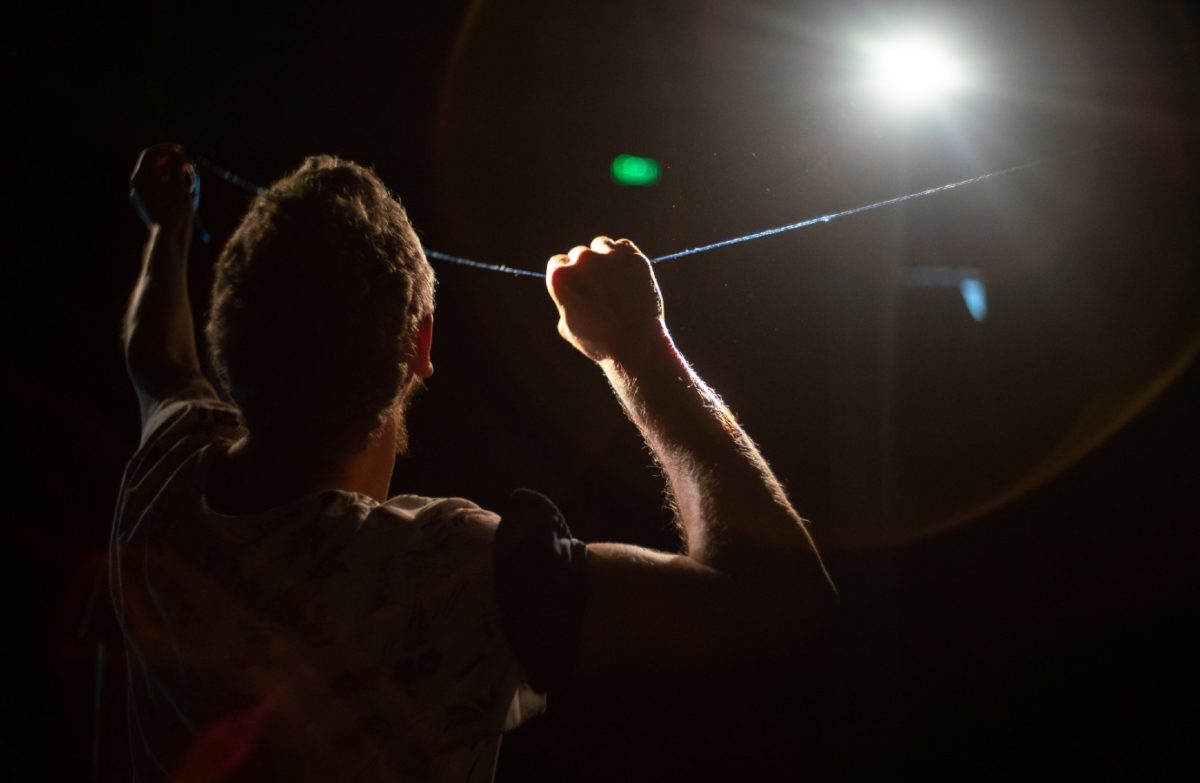 “Outcome”, by Manuel Pelmuș and “8 days a week” by Eduard Gabia, presented as double bill, on July 16 and 17 at CNDB.

There is very little being said about the artistic versatility of contemporary dance practitioners. Eduard Gabia is a significant example. Over time, he has fluidly crossed and experienced several areas, environments and artistic contents. In the 2000s, cultural institutions presented him as a choreographer and performer of works presented at international dance festivals. IMDb and Cinemagia announced him as a cast actor in the lead roles of several international film productions. Currently, the websites of clubs and music festivals mention him as the founder and percussionist of an electronic / synth pop / new-wave music duo called Karpov not Kasparov, who recently signed a contract with the Disco Halal label from Berlin.

Trained as a dancer and choreographer, the artist Eduard Gabia returns to the stage of the National Center for Dance Bucharest in a triple stance: that of a performer in the initial version of the work “Outcome”, by Manuel Pelmuș, which he revisits with his own body 20 years later, and that of an author who enters his own work for the first time – “8 days a week” – 15 years after its premiere at the Kaaitheater Brussels in 2006. The two performances will be presented as a double bill, on July 16 and 17 at CNDB. The performance 8 days a week” also creates the opportunity to reunite with the dancer Carmen Coțofană, one of the performers in the initial cast of the work. The third position in which Eduard Gabia will be present is that of a performer in “Stars High in Amnesia’s Sky (reactivations)”, by Mihai Mihalcea, which will be presented at CNDB, on July 24 and 25.

“Outcome” by Manuel Pelmuș is one of the most daring choreographic works created in the early 2000s in Romanian contemporary dance. Outcome was seen as a kind of short circuit, a shock, which for many of the young choreographers and critics of that time produced a disruption of the French aesthetics, which had really left its mark on Romanian choreography after the project “La Danse en Voyage”, organized in Bucharest in the early 90’s.

Manuel Pelmuș considers that this is the first piece that debates what choreography means for him, the body’s standing in society, artistic and political influences, all in which “a manner of choreographic thinking materializes, closer to the performance of visual arts and certain conceptual searches in choreography”. The artists talks about Outcome as a work that informed and influences everything he did afterwards, even if in different forms or setups:

“Outcome started a form of critical reflection towards the means of artistic production and the conventions and context in which they take place. The main merit (if not all of it) for the work is Eduard Gabia’s. We were friends and, one day, I told him about my idea. Edi was very open and pervious, he fully understood the artistic proposal, even if the concept was quite uncommon for him, but for me as well. What followed was a period of rehearsals and discussions, during which the piece evolved naturally, supported also by Edi excellent performance abilities. It was not a working process in the traditional sense, one in which I showed some moves and he tried to do them as well as he could. It was more of a process of accumulation, in which we fed each other ideas and feelings, adding movement details as we went along, and finally everything came together as Outcome. I remember that we talked about the relationship between object and subject, between presence and expression, between body and context.”

“8 days a week” is the performance created by Eduard Gabia and presented for the first time in 2006 being a co-production of CNDB and Kaaitheater Bruxelles. In order to create the work, the artistic team from back then (Eduard Gabia, Carmen Coțofană, Maria Baroncea, Florin Fieroiu, Brynjar Bandlien and Beniamin Boar) benefited from a creative residency at Kaaitheater, one of the most prestigious European contemporary dance theatres, where they also presented the performance two times.

8 days a week is a performance built on an ingenious practice of movement, which Gabia experienced playfully himself before developing a whole set of tools that he delivers to the dancers for their own use. Nothing simpler, nothing more difficult.

“In the reality of the world around us, our actions are composed of two types of interaction, Gabia tells us. Informational – we have the necessary knowledge for that action. Energy – we know and have the exact amount of energy to perform that action. The action is the meeting point of the two perspectives, which in 8 days a week I tried to unbalance, turning each action into a “failure”, into a “mistake”. And from one mistake to another, a normal, natural reality gathers.”