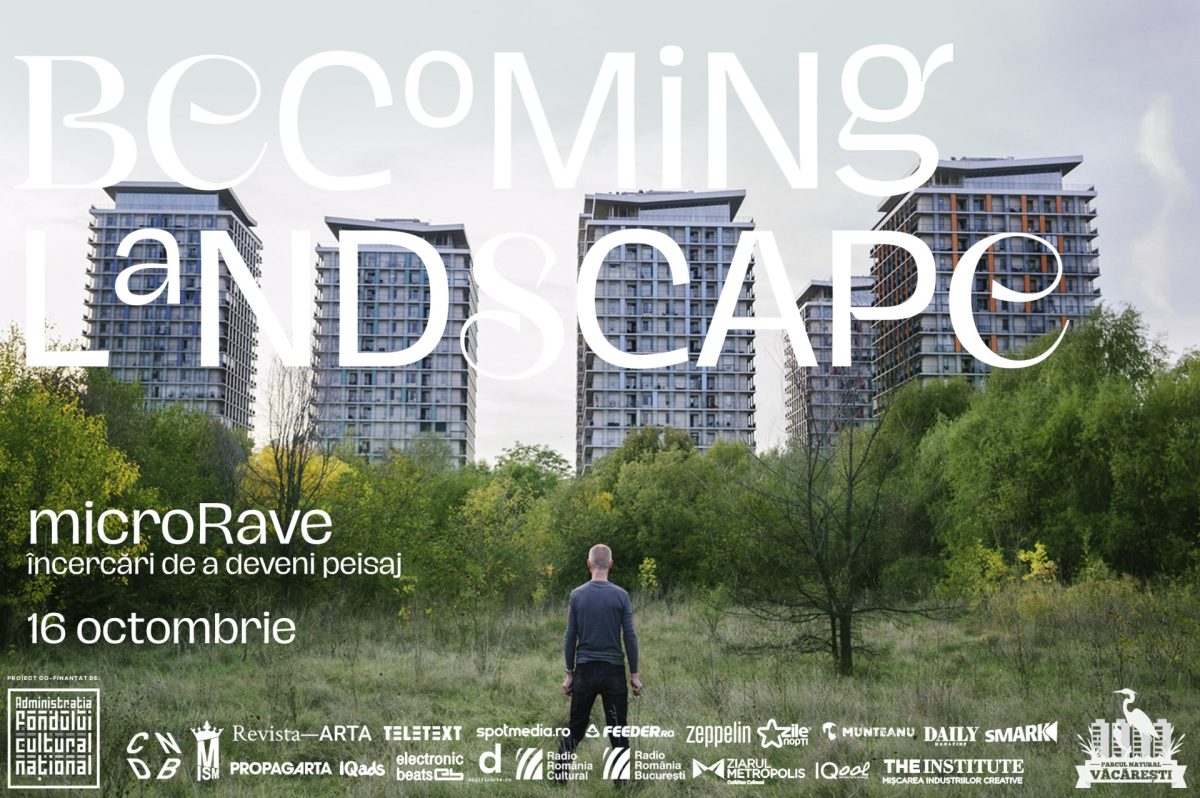 Choreographer Andreea David, together with the TechnoFields collective, is expecting the public at Văcărești Natural Park for a series of encounters in nature, during which forms of collective dance will be passed through the filter of contemporary art, to be transformed into landscape. microRave – Attempts to become a landscape is an invitation to forever disappear from the anthropic framework, taken over by the energy of the leaves that make their way through the cracks of the concrete slabs or by the shoot that pierces the ruins of the forgotten districts.

Is it possible for the Other, and everything around us in general, to become a sensitive extension of who we are? Is it possible to project ourselves beyond the perimeter of our own body through voice, sound and gaze? Can we deconstruct individuality so that once dissolved in what we now call nature, can we live as part of an organism larger than ourselves? Or, at the opposite end, to become no man’s land, perhaps the emptiness between entities, in what remained unshaped in the anthropic environment? Possible answers alternate in the trance of a repetitive dance, a reflex-response to the ritual rhythm of the music. You don’t control your body, just dance! What would it be like to perceive yourself as always being there, as if the word landscape never existed? A group of people transforms into a unitary and permeable organism, as the former individuals lose their socio-cultural identity, becoming nobody. It then loses its contours, to gradually turn into a landscape. The dancers merge with the plant density, the voices of the plants and the songs of the birds, with discreet noises that become sound textures and electronic music sequences. We mix with the place where the landscape breathes, speaks through countless voices, moves, sits, flattens, creates volumes, vibrates. We lose ourselves in an objective space, which nullifies any socio-cultural attribute, receiving us as simple forms of life, along with trees, grass, snails or birds. The dance floor transforms into a perimeter of infinite possibilities of transformation, and reproduces the mechanics of salvation. Far from technological tyranny, the dancer abandons themselves in a generic and impersonal desert, trust-falling into motion.

In the Văcărești delta there is an edge, and its concrete slope with 21 degrees of inclination. There is spontaneously growing vegetation in the 30 years since plans to build a reservoir were abandoned. The vegetation outlined a meadow. From the perspective of the edge, the contoured glade looks like a scene. The TechnoFields collective will refer to the “nature scene” by investigating its “nature”. In a plant-dream, in which the voices of plants are heard, they mix in rhythms and take control. Using specialized equipment, Sillyconductor will take over and process the electrical impulses of the surrounding plants, which will then be transform into musical notes, rhythm, bass and arpeggios, essential elements of electronic dance music, creating a self-sustaining generative system.

The TechnoFields meeting will take place on Saturday, October 16, at 15.00.
Access to Văcărești Natural Park is from Asmita Gardens.
The interventions of the artistis are non-invasive and will not have a negative impact on the landscape, species or habitats.

The costumes are provided by Andrei Dinu, Paula Dunker and TechnoFields.